Review Lenovo K10 Plus // K10 Note – Lenovo officially launched its new smartphone named Lenovo K10 Plus, one series from the K10 Note, which had already been introduced.

Like the K10 Note, the Lenovo K10 Plus also comes with a waterdrop design that now features an HD + 6.22-inch screen that offers an aspect ratio of 19: 9 and a screen-to-body rate of 84 percent. 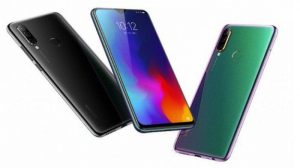 There is a curve at the top which is home to a 16MP selfie camera. There are also three cameras mounted behind with LED flash and fingerprint sensor for device security.

All three cameras consist of a 13MP primary camera coupled with 8MP ultra-wide, and 5MP, which also has camera features such as PDAF, Super nightscape, and slow-mo video recording support.

Lenovo K10 Plus powered by Snapdragon 632 chipset that is assisted with 4GB and 64 GB internal storage, which can still expand through microSD card slot of up to 2TB.

Connectivity features, there is already support for dual-SIM, 4G LTE, Bluetooth 5.0, Wi-Fi, and USB Type-C. Meanwhile, to keep on, the smartphone that runs on the Android OS Pie is powered by a 4,050 mAh battery.