The small hole placed in the top left corner of the screen is home to a single 16 megapixel camera for taking selfies or video calls. On the back, we get a quad-camera setup packed into a circular camera module. 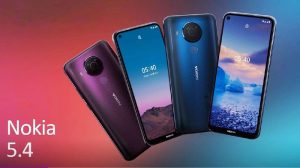 This is exactly what we found on the FCC certification a while back. While the four cameras consist of a 48 megapixel main camera combined with a 5 megapixel ultrawide camera.

There are also two cameras left, namely a pair of 2 megapixel cameras, each of which acts as a macro camera and a depth sensor. Complementing the camera, there’s an LED flash on the side and what looks like a capacitive fingerprint sensor is placed on the bottom to unlock the device.

Nokia 5.4 is powered by a mid-range processor from Qualcomm called Snapdragon 662 which was released earlier this year built on an 11nm process with 4x Cortex-A53 and 4x Cortex-A73 cores plus Qualcomm Spectra 340T support for image storage in HEIF format.

Helping Snapdragon 662 which also has a Qualcomm AI Engine to work more optimally, Nokia 5.4 is equipped with 4GB / 6GB RAM and a choice of 64GB or 128GB of original storage which is equipped with microSD card support to allow users to expand storage capacity.

Furthermore Nokia 5.4 has OZO audio with a dedicated button to access the Google Assistant and this new smartphone from Nokia runs the Android 10 operating system, but the company promises to get Android 11 soon in an upcoming update.