Review Motorola Moto E6 Plus – the successor smartphone of the Moto E6 comes with a more modern design of water droplets with better specifications than its predecessor.

Moto E6 Plus comes by packing a 6.1 screen with a small curve at the top to accommodate a selfie camera that offers HD + resolution, an aspect ratio of 19.5: 9, and provides an 80% screen-to-body ratio. 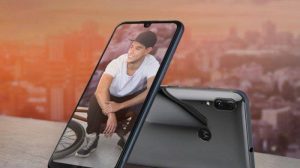 For photography, this new smartphone from Motorola arrived with a dual-camera arrangement consisting of a 13MP 2MP depth sensor primary camera mounted vertically behind with an LED flash and fingerprint sensor.

As for taking selfies or video calls, an 8-megapixel camera has been pinned to the front. For hardware, the Moto E6 Plus relies on the Helio P22 chipset from MediaTek.

The chip is combined with a choice of 2GB or 4GB of RAM along with 32GB and 64GB of internal storage, which can still be expanded up to 512GB via a microSD card slot.

Other features provided include standard connectivity such as Bluetooth 4.2, Wi-Fi, GPS, micro USB port, and running on the Android Pie OS.

This smartphone also has a P2i nano-coating to keep it resistant to water splashes. Meanwhile, to make it usable all day, the Moto E6 Plus is powered by a 3,000 mAh battery.